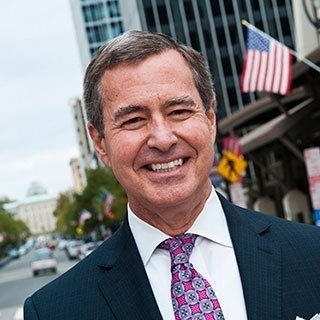 Lynn Burleson is a native of Albemarle, North Carolina. He was admitted to the practice of law in North Carolina after receiving his Bachelor of Arts and Master of Public Administration degrees from the University of North Carolina at Chapel Hill, and his Juris Doctor degree from the Wake Forest University School of Law. Before joining Tharrington Smith, Mr. Burleson served as a district court judge and was a partner in the law firm of Kilpatrick Stockton. He has served as an adjunct professor of law for the Wake Forest University School of Law and High Point University. Mr. Burleson practices exclusively in the field of family law. He is a North Carolina State Bar Certified Specialist in Family Law and is past president of the North Carolina Chapter of the American Academy of Matrimonial Lawyers. He is chair of the Arbitration Committee and has sat on the Board of Governors as a Chapter Delegate to the national American Academy of Matrimonial Lawyers. He frequently serves as a faculty member of the national AAML Matrimonial Law Arbitration Institute. In 2009, he became one of only 100 divorce attorneys from across the United States to be inducted as a Diplomate of the American College of Family Trial Lawyers. He is listed among the "Legal Elite" by Business North Carolina. He is listed as one of the "Super Lawyers" by Charlotte and Law and Politics magazines. He is listed in the Family Law Section of Best Lawyers in America and has been named the "Raleigh Best Lawyers Family Lawyer of the Year". He has served as chair of the Family Law Section of the North Carolina Bar Association and has served on the Board of Governors of the Association. Mr. Burleson was awarded the Distinguished Service Award from the North Carolina Bar Association for his service to the Family Law Section. He has served as president of both the Twenty-First Judicial District and the Forsyth County Bar Associations. Mr. Burleson is a frequent speaker at law schools and at continuing