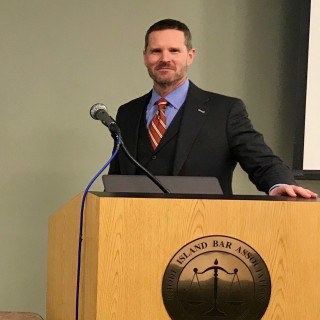 Attorney John Larochelle is a former Rhode Island state prosecutor who has represented clients in complex and highly sensitive litigation matters in Rhode Island Family Court and in District, Superior, Supreme and Federal Court in Rhode Island and Massachusetts.

Attorney Larochelle applies his extensive criminal law knowledge and experience to representing clients in all criminal matters - from serious felonies such as murder, sex crimes, and distribution of controlled substances – to misdemeanor cases such as domestic assaults and traffic-related offenses. He has litigated over one hundred DUI cases.

Attorney Larochelle represents clients in state and federal courts in Rhode Island and Massachusetts. He is also admitted to practice before the Supreme Court of the United States of America.

Q. Can I install a camera in my bedroom
11 August 2020
A: Good afternoon, Fearful of Threats, Since you are being permitted to live in the house of your father and his wife, it is they and not you who may decided what type of security cameras are permitted in their home. The room where you sleep is their room; they are just letting you sleep there. You have no right to a security camera in their house, even in the room in which you are sleeping.

Q. Case Description Emergency motion question regarding returning daughter to unsafe situation
24 July 2020
A: You must comply with the court's order. There is no excuse to fail to do so. If you feared so much for you child's safety, you should have filed your own motion, requesting the court to order you not to return your daughter to her mother. If your concern is so great and your daughter is in such danger, you have the option of notifying the police or DCYF of the danger. You should immediately hire an experienced Family Law attorney to advise you through this process. Respectfully, Father-in-Ohio, in a multi-state child-possession situation that is so serious that you are considering defying a judge's orders and delaying returning a child to her mother, representing yourself is reckless. My answer to your question does not constitute the creation of an attorney-client relationship. The legal advice given in response to your question is solely based on the limited information you provided in your question. For comprehensive legal advice encompassing all of the details in your legal matter, please contact my office for an in-person consultation with me.

United States v. Ackerly
US Court of Appeals for the First Circuit