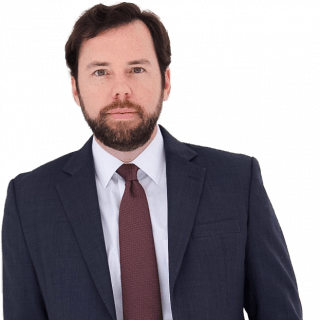 Mr. Roberts founded Benjamin Roberts Law, PLLC in 2018. He is a third-generation Texan and a native Houstonian. Since founding his firm, Mr. Roberts has recovered millions of dollars on behalf of those injured as a result of another’s negligence. Mr. Roberts takes special interest in battling insurance companies for fair and just result on behalf of his clients.

Since 2015, Mr. Roberts Mr. Roberts been named a Rising Star by Super Lawyers, and in 2019 he was inducted into the Million Dollar Advocates Forum for substantial settlement achieved in product liability case. In addition, Mr. Roberts was selected by The National Trial Lawyers Top 100, an invitation-only organization composed of the premier trial lawyers from each state or region who meet stringent qualifications as civil plaintiff trial lawyers.

Mr. Roberts holds a license to practice law before all Texas state courts and multiple Federal Courts. He is an active member of the Houston legal community, belonging to the Houston Trial Lawyers Association, Houston Bar Association, and American Association of Justice. He is a former member of a State Bar of Texas Grievance Committee, where he handled attorney investigations and disciplinary actions.

In addition to personal injury, Mr. Roberts has extensive experiencing in handling toxic tort cases, including chemical exposure and smoke inhalation claims in single plaintiff cases, as well as mass tort cases. Since 2010, Mr. Roberts has worked on three separate mass torts involving thousands of plant workers and nearby residents exposed to hazardous chemicals released from refineries and chemical plants along the Houston ship channel and Texas City area.

“We cannot expect big corporations and insurance companies to have respect for law and order, we must teach them respect by holding them accountable, especially when their negligence results in the injury of another. That’s what I try to do every day, and that’s why I love this job.” – Ben Roberts

Aggressive Personal Injury Law Firm. Where you turn when you've been hurt. www.benjaminrobertslaw.com 713-609-1898 If you or a loved one have been injured due to someone else’s negligent or reckless...