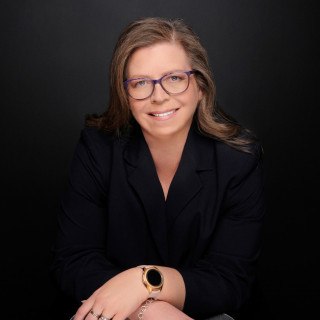 Pamela Fero moved to South Florida in 1991 when she was hired by the Federal Aviation Administration (FAA) as an Air Traffic Control Specialist. She worked for the FAA as a controller for over 26 years and retired in 2016. Prior to moving to Florida, she lived in Ohio where she learned the value of hard work by working on the family farm.

Ms. Fero has one step-son, three adopted children, one foster child, and two biological children. The children are all unique individuals with their own strengths and weaknesses. Having such a large and diverse family naturally led Ms. Fero to an interest in Family Law and the issues that arise.

Ms. Fero has earned an Associates's Degree in Computer Programming and a Bachelor of Arts in Labor Education. Following graduation, Ms. Fero continued working for the FAA and took classes in arbitration advocacy.

Ms. Fero received her Juris Doctor from Florida International University College of Law in 2014. During her time in law school, Ms. Fero participated in two clinics, the Family and Education Clinic and the Health Law and Policy (HELP) Clinic where she enjoyed helping people with their legal issues. She also was a member of the FIU Law Review from 2012-2013, and an Articles and Comments Editor for the Law Review from 2013-2014.

Q. My ex husband has been doing weird things while the girls are visiting him. Latest thing is putting a gun to our daughte
April 20, 2022
A: Do you wish to deny visitation to protect your child's safety? If so, you must be able to present solid and sufficient proof that he is a danger to your children in order to legally take them away from him. Contact a local Family attorney to get the best help you need with your issue.

Q. if i were to file for termination of parental rights to a parent who was never really there would the judge grant it
April 18, 2022
A: If a court has determined that the child is dependent and a case plan has been submitted, but the child continues to be abused, neglected, or abandoned, the father's rights might be terminated.

Q. Family law
March 7, 2022
A: Section 741.30 of the Florida Statutes allows you to seek an injunction to protect yourself from domestic violence. If approved, it may allow you to stay in the house and keep him away from you and the house. You should research this Statute and confer with your local attorney.