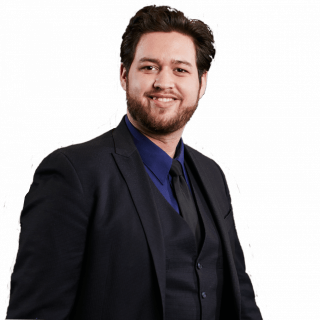 My name is Nicholas Andrews. I decided to become a lawyer when I was a junior in high school. Before that, I never really knew what I wanted to be. In elementary school I thought I would be a fireman because they drove cool trucks, or maybe an “army guy” like my big brother. In junior high, I thought about being a chemist. But I quickly discovered I was not cut out for that. Nothing else really appealed to me, until I heard someone mention how someone else would make a good lawyer. That got me thinking that maybe I could do that.

That thought stuck in my head for the next two years. Then I went off to college to get my undergraduate degrees in Western Legal Traditions and Politics & Policy. I graduated in 2017 and moved on to law school. I attended Liberty University School of Law. While there, I was a member of the Moot Court Board and the Alternative Dispute Resolution Board. I also did my share of competitions. In moot court, I was runner-up at the intermural tournament. But my greatest achievement was in the negotiations team. My partner and I were finalists in the mid-atlantic regional ABA tournament two years in a row, earning back-to-back invitations to the National ABA tournament, where we were quarterfinalists our first year and placed 11th our second. This was the first time a team from Liberty had ever received back-to-back invitations to nationals. For our accomplishment, we were awarded the Liberty University Alternative Dispute Resolution Award.

I graduated in 2020 in the midst of the COVID-19 pandemic. I immediately began to study for the bar. And after several hardships that included shifting to remote exams, changing states, and faulty exam software, I passed. I then decided to start my law firm. Inspired by the entrepreneurs who braved the pandemic, I decided to dedicate my firm to serving small businesses. I founded Victrix Legal, LLC as a law firm designed to serve professionals. And I help build, protect and grow organizations.