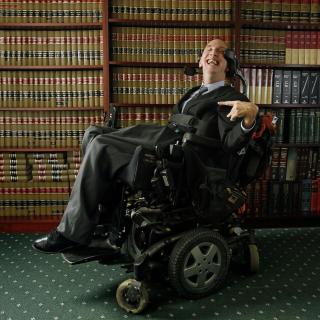 Sean Pevsner established this law firm with his best friend, Mark Whitburn. They have been best friends since 1986. Mr. Whitburn assisted Mr. Pevsner throughout these years. This firm is one among many goals which they have accomplished together. For more on their story, please visit our news page. Mr. Pevsner is a University of Texas Law graduate with severe cerebral palsy who operates a motorized wheelchair by the use of head movements. Due to his quadriplegia, he cannot write but must rely on an interpreter or a specialized computer to do his work. People underestimated him from the moment that he was born to the present. He was born clinically dead. The anesthesiologist had to administer CPR for 45 minutes until he could breathe on his own. The anesthesiologist probably was thinking this guy is not going to survive as he was administering the CPR, but Mr. Pevsner proved him wrong after those 45 minutes. Mr. Pevsner has been proving people wrong for 41 years. People who were the so called experts said that his life span would be very short. They said he would probably live until he was in his thirties. These people said that he could not go to a regular school, much less take mainstream classes such as Latin, English literature and calculus. Again, he proved them wrong. His grades were A’s and B’s in these mainstream classes. At the end of his high school in 1990, the Arlington Independent School District (AISD) officials projected that he would graduate ahead of their initial plan for his graduation. Originally, they believed that he would graduate at the age of 22. He graduated at the age of 19 in the top 20% of his high school class. Despite all of these achievements, people did not believe that he could attend a major university like the University of Texas at Austin. At this point, his self advocacy skills automatically went into overdrive whenever someone even mentioned the word “can’t” in the same sentence as his name.

Partner
Whitburn & Pevsner, PLLC
2012 - Current
• Prevailed in several cases compelling the State of Texas to provide Texas citizens with disabilities with community-based services under Title II the Americans with Disabilities Act (“ADA”). • Prevailed in several cases representing group homes for people with disabilities against homeowners’ associations attempting to impose unlawful restrictive covenants on the homes under the federal and Texas Fair Housing Acts. • Assisted a Tarrant County College (“TCC”) student with a disability change the TCC financial aid policy to avoid discriminating against students who need to withdraw from classes due to their disabilities. • Ensured that a high school student with cerebral palsy received appropriate transitioning services under the Individuals with Disabilities Education Act (“IDEA”). • Represented several students with disabilities at ARD meetings, ensuring that school districts provided them with appropriate IDEA services.

Equal Justice Works Fellow
Disability Rights Texas, formerly Advocacy Incorporated)
2005 - 2007
• Assisted people with disabilities in employment and education cases during a two-year Equal Justice Works Fellowship by using Titles I & II of the ADA, Section 504 of the Rehabilitation Act of 1973 and the IDEA. • Prevailed on an administrative appeal to readmit a person with severe dyslexia into a private law school. • Ensured that a school district provided appropriate IDEA services to a high school student with Down Syndrome. • Authored an employment law manual for seminars taught statewide. Researched the provisions of Title I of the ADA, EEOC regulations and case law interpreting both of these when creating this manual.

Legal Intern
The United States Department of Justice Disability Rights Section
2003 - 2003
• Conducted research and wrote a memo on the conflicts between the HUD regulations and ADA\ABA accessibility guidelines for Justice Department officials. • Composed policy letters and memos in response to inquiries from the general public and federal officials based on my analysis of various regulations promulgated by the Justice Department for Titles II & III of the ADA. • Performed legal research on the relationship between ADA enforcement and contract law in settlement agreements. Prepared a memo based on this research for the Disability Rights Section.

American Bar Association Commission on Disability Rights
commissioner
2019 - Current
Activities: I served as a panelist on a CLE on the Supreme Court'sg Olmstead decision that ruled the unnecessary institutionalization of people with disabilities constitutes discrimination under the Americans with Disabilities Act.

Speech on Disability Rights
November 14, 2017
the ARC of the Greater Mid Cities in the Dallas/Fort Worth area.

The Future of Olmstead 2020 and Beyond., American Bar Association webinar, https://www.youtube.com/watch?v=JWMEbfAsAGs
December 9, 2020
American Bar Association Commission on Disability Rights
We discussed the future of the SCOTUS decision in Olmstead which ruled that unnecessary institutionalization of people with disabilities constitutes unlawful discrimination under Title II of the Americans with Disabilities Act.