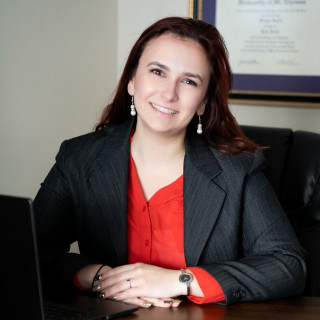 Meagan M. Guptill grew up in Duluth, Minnesota and attended Duluth East High School, where she competed in Student Congress, Speech and Debate, and performed in local theater. Meagan received her Bachelor of Science degree from the University of Wisconsin-Superior, along with her paralegal certificate. She graduated from the University of St. Thomas Law School in 2019. While in law school, Meagan worked at the Kanabec County Attorney’s office, the Isanti County Attorney’s office and the Isanti City Attorney’s Office. While working for three different prosecuting authorities, she gained valuable experience appearing in the courtroom handling bail hearings, restitution hearings, and contested omnibus hearings, as well as jury and court trials.

Meagan is an attorney coach for the Cambridge-Isanti Mock trial team. She is the coordinator for fundraising and sponsorship with the Cambridge-Isanti Soccer Club, as well as a coach for the summer recreational teams. She and her family are active in wrestling with Rum River Wrestling Club as well as fostering animals with Ruff Start Rescue.
At Parker Satrom Law, P.A., Meagan is involved in real estate matters, probate and estate planning, family law, general litigation and criminal defense.