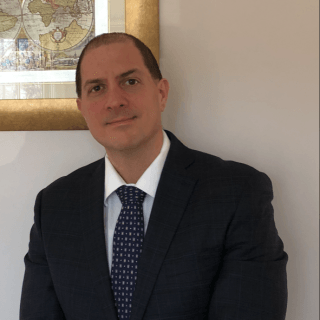 In 2008, Mr. Vigliotti started his own law practice where he focuses the bulk of his efforts on the defense of all criminal matters and personal injury litigation. He currently serves as Chief Counsel for the New York State Fraternal Order of Police Foundation Inc., and is former staff counsel to a New York State Senator. Mr. Vigliotti has been active in teaching trial advocacy to law students. He has been asked several times to teach at Hofstra Law School’s Trial Advocacy program courses.

Mr. Vigliotti is a former traffic prosecutor at 16 Cooper Street and handles both simple and complex traffic matters from arraignment to trial.

Q. My granddaughter’s father was issued a restricted drivers license for a DUI & he is telling me that he can drive w baby
July 28, 2021
A: Is the question whether your grandfather can drive with a baby while possessing a restricted license? If so, I don't believe that your category of license ever restricts your passengers. In other words, I'm fairly certain that as long as he possesses a license, he can drive. Whether his passengers are adults or children is not limited by the type of license he possesses.

Q. , how can I change an independent attorney that is NOT serving him/her
July 28, 2021
A: You should hire someone new if you are not satisfied with your current lawyer. If your attorney is legal aid or 18b, you can ask the court to consider giving you a new lawyer.

Q. I Failed to stop at stop sign. Ticket has a court date on it, cop says it’s not mandatory, just wanted to be sure.
July 28, 2021
A: A stop sign ticket has three points. You should not merely plead guilty because once you do, the points will be assessed automatically. As far as appearing in court, it is mandatory. The officer told you something that is completely untrue. If you fail to appear, they may issue an impending suspension notice. Make sure you appear or if the court allows, you may hire an attorney to appear for you. Good luck!