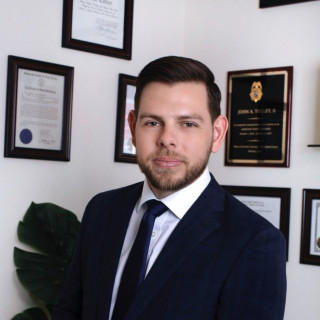 John Tolley is a former Prosecutor & Insurance Defense lawyer licensed in the States of New York, Florida, Pennsylvania and New Jersey. Mr. Tolley has tried over 45 criminal and civil jury trials. He is the co-owner and a partner in JT Law Firm where he represents clients in disputes regarding homeowner's insurance claims and criminal defense.

Mr. Tolley attended Nova Southeastern University, Shepard Broad College of Law, where he obtained his Juris Doctor in 2014. While in law school, Mr. Tolley was an active member of the Nova Trial Association and the Moot Court Society, representing his law school in several trials and appellate advocacy competitions nationwide. Prior to attending law school, he graduated from the University of Central Florida with a Bachelor of Science and Double Major in Legal Studies and Criminal Justice.

Upon graduating with honors from law school, Mr. Tolley served as a prosecutor handling thousands of felony and misdemeanor cases. He numerous jury trials and was quickly promoted to a special unit prosecutor handling violent first-degree felonies including attempted murders.

Mr. Tolley continues to be actively involved in his community. Since 2014, he mentored and developed the next wave of Law graduates serving as a head coach for Nova Southeastern University Shepard Broad School of Law's mock trial program.

Top 100
The National Trial Lawyers
2021
The National Trial Lawyers: Top 100 is an invitation-only organization composed of the premier trial lawyers from each state or region who meet stringent qualifications as civil plaintiff and/or criminal defense trial lawyers. Membership is extended only to the select few of the most qualified attorneys from each state or region who demonstrate superior qualifications of leadership, reputation, influence, stature and public profile.

Excellence in Trial Advocacy
Order of the Barristers
2014
The Order provides national recognition for individuals who have excelled in advocacy and service at their respective schools.

John Tolley: A Leading Attorney in the Legal Field and the Founder of JT Law Firm
The New York Weekly

Tips for Florida homeowners during hurricane season, according to property damage lawyer

Attorney John Tolley of JT Law Firm was interviewed by WRHU-FM 88.7 regarding the Derek Chauvin trial. Mr. Tolley commented on the May 25, 2020 murder of George Floyd by former Minneapolis Police Officer Derek Chauvin. Chauvin was convicted of 2nd degree murder on April 20, 2021 after a 10 hour deliberation by the 12 person jury. The trial garnered national attention following the nationwide protests following Mr. Floyd's death.