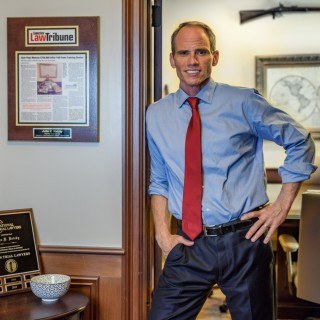 John Naizby was raised in a small dairy town in upstate New York. He grew up with his sister, mother, maternal grandparents, and great grandmother; he lost his father at the age of three. John knew from an early age that he wanted to be involved in helping people; ultimately that is what led him to the law.

John started his career as a public defender, and eventually became an insurance defense attorney. For over 20 years now though, John has exclusively represented people (not Insurance companies). A graduate and senior instructor at the Trial Lawyers College, John was recognized as a Connecticut Super Lawyer 2006-2017, and continues to help people who have been negatively impacted by instances of personal injury stemming from negligence.
As a result of his hard work and dedication, John has received the America’s Top 100 Attorneys Lifetime Achievement Award, is an invited member of the American Board of Trial Advocates (ABOTA), and has earned membership in both Million Dollar Advocates Forum and the Multi-Million Dollar Advocates Forum.

Over the course of his career, John has had the pleasure of representing good people and their families, some of whom have lost loved ones, He is humbled by the friendships and connections he has made along the way. Because of his ability to relate to their stories, John has been able to effectively convey those stories to the juries he’s handled cases in front of and convey fully how his clients have been effected.