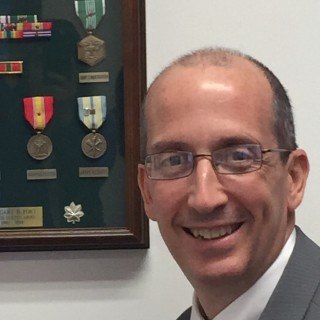 Gary Port has been recognized by the New York Law Journal in 2016, in “Those Who Lead, Pro Bono Category.” He was also honored in 2016 by the Center for Children, Families and the Law, and the Gitenstein Institute for Health Law and Policy. In 2016 he was also honored by Angel for Warriors for his Pro Bono work for Veterans.
Mr. Port is a former Assistant Professor at the Maurice Deane School of Law, Hofstra University. He has also been named Chairman of the Nassau County Bar Association Veterans’ Law Committee. Mr. Port has also been appointed to State Senator John Brook’s advisory committee on Veterans issues.
Mr. Port heads the Divorce and Family Law group. His practice focuses on divorce, custody, support and family law related matters. He also practices in the area of complex commercial litigation, as there is often an overlap with commercial law and the division of property in divorce.
As a retired Lieutenant Colonel, Mr. Port also heads the Military Law/Veterans Rights section, working to get discharge upgrades and representing service members and veterans in the U.S. Court of Federal Claims, as well as at Courts-Martial. He has appeared in New York State Court and in New York Federal District Courts.
Mr. Port is also recognized for his knowledge of military retirement pay and benefits as they relate to divorce and has delivered classes to other attorneys in New York and Pennsylvania.
Mr. Port graduated law school in 1986 and was commissioned as an officer in the United States Army later that year. He served on active duty and as a reserve officer until January 1, 2015, when he retired a the rank of Lieutenant Colonel. Mr. Port served in various positions and ended his career as the legal advisor (Staff Judge Advocate) to the Commanding General of the much storied 78th Training Division. He was twice awarded the Meritorious Service Medal, three times awarded the Army Commendation Medal and was awarded the Army Achievement Medal.

Court of Appeals for Veterans Claims
Since 2004

Partner
Law Office of Gary Port, P.C. d/b/a Port and Sava
2002 - Current
• Established a general practice law firm. The establishment involved the creation of a business plan, establishing goals and milestones for the business to succeed. • Established goal oriented business practices to meet the needs of the clients. • Law practice consists of general practice with a large base of military clients. The firm provides legal advice and assistance to the client on a host of legal issues. Strong concentration on litigation in both state and federal courts. • Practice is divided between complex commercial litigation, family law and sport/entertainment law. • Provide pro bono assistance to veterans. • Involved in the intake of cases, client interviews, preparation of pleadings, motion papers, and all aspects of litigation to include trials. • Manager of a small law firm consisting of four attorneys, a law clerk and a bookkeeper. The overall management of the law firm involved the hiring, training and supervision of the staff. • Established a close and tight knit team which places the mission of the office as the first consideration, resulting in a high quality work product and a high level of client satisfaction.

Associate Attorney
Sondra I. Harris and Associates
1994 - 2002
• Senior Associate at a five attorney law firm • Handled all aspects of litigation from client intake through resolution of the matter. • Negotiated settlements of personal injury cases on behalf of plaintiffs. • Drafted appellate briefs • Supervised the office staff of three secretaries, one paralegal and one bookkeeper. The supervision involved being placed in charge of the hiring and firing of the support staff, the oversight of the bookkeeper and paralegal.

Associate Attorney
Kanterman, Taub and Breitner
1993 - 1994
• Associate in an insurance defense firm. • Engaged in all aspects of discovery, to include taking of depositions, drafting motions and responding to motions. • Negotiated settlements on behalf of insurance companies in personal injury cases.

Honoring Heroes
• Center for Children, Families and the Law at Hofstra University
2016

Preeti Dawane and Gary Port explain New York Divorce Law. In Part 2 of the House, they discuss the marital home. Call for a free 15 minute consultation -516-352-2999

Preeti Dawane and Gary Port explain New York Divorce Law. In Part 1 of the House, they discuss the marital home. Call for a free 15 minute consultation -516-352-2999