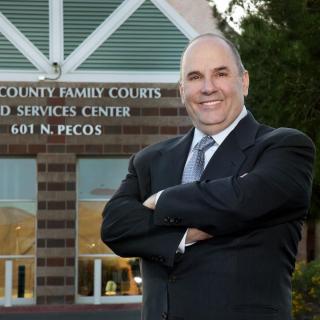 " DOUGLAS CRAWFORD LAW was established on January 2, 1989 under the original name of Law Offices of Douglas C. Crawford, Esq. Since that time Mr. Crawford has represented Nevadans in many areas of the law. The primary focus of the firm has been in the areas of Family Law (divorce, child custody, child support, alimony, guardianship, prenuptial agreements, etc.), Criminal Defense (DUI, drug offenses, violent crimes, battery domestic violence, theft, etc.) and Personal Injury (wrongful death, auto and motorcycle accidents, collisions with 18 wheelers, pedestrian injuries, etc.). The firm also handles some business litigation. The office of DOUGLAS CRAWFORD LAW is located at 1404 S. Jones Blvd., Las Vegas, NV 89146, near the corner of Charleston and Jones. His well trained and experienced staff is always professional, polite and helpful. The location is handy and easy to find whether you live in Summerlin, Downtown Las Vegas or Henderson Nevada. Doug Crawford grew up on a working farm in Tulelake California and graduated from high school in 1973. After serving three years in the U.S. Army during the Viet Nam war (stationed in Germany), Doug returned to the United States and started college. He graduated with a Bachelor of Science in Political Science from Southern Oregon State College in 1981. He then went on to complete his Juris Doctorate from McGeorge School of Law in 1984. McGeorge is often called “The Harvard of the West Coast”. Doug passed the Nevada bar exam in 1985, worked for other well-known lawyers (including Supreme Court of the State of Nevada Justice Michael Cherry) for several years, and then started his own firm in 1889. The firm was immediately successful and Doug has not looked backwards since!