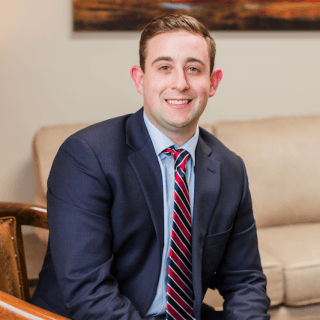 Brandon D. Fersten's practice encompasses personal injury, business litigation and contract dispute representation of individuals and small businesses, juvenile defense, criminal defense, DUI defense and appeals. Brandon's main goal in filing a lawsuit and negotiating with insurance companies is receiving the compensation and relief that his clients deserve for the wrong that was done.

Brandon has successfully drafted and argued an appeal in Criminal Court that resulted in a reversal of the trial court's ruling, received numerous dismissals of criminal and delinquency charges in General Sessions and Juvenile Court, negotiated settlements on behalf of clients involving car accidents, slip and falls, contract disputes, invasions of privacy, anti-wiretapping, landlord-tenant disputes and prisoner rights, and argued a motion to dismiss a contract dispute that was granted, among various other accomplishments that have benefitted his clients.

When Brandon is not practicing law, he enjoys playing softball and golf, watching sports and hiking in the Great Smokies with his girlfriend of four years, Taylor. He is a die-hard L.A. Rams and N.Y. Mets fan. He also recently brought home his first daughter, an English Golden Retriever puppy, that occupies the majority of his time at home.

The Ultimate Guide to Criminal Cases in Knoxville and East Tennessee

The Ultimate Guide to DUI Cases in Knoxville and East Tennessee

The Ultimate Guide to Juvenile Cases in Knoxville and East Tennessee

Difficulty in Establishing a §1983 Lawsuit Against Municipalities For Police Brutality Proves That A Solution is Needed: Respondeat Superior May Be The Solution
December, 2018

Q. Can I be cited for leaving the scene on private property. While parking damage occurred at minimal.
14 May 2020
A: In short, yes. Leaving the scene of the accident with damage to another vehicle that appears to be less than $1,500 is a Class B Misdemeanor. A Class B Misdemeanor carries a maximum jail time of 6 months and fines up to $500. The court in addition to or in lieu of those penalties can require you to attend a driver's education course that may cost between $50-175. InTennessee, absent an exception to the warrant requirement, a warrantless arrest for a misdemeanor that was not committed in the officer's presence is illegal.This is a potential defense depending on other circumstances of the citation, including the court that you were charged in. If it is a citation in municipal court, or city court, then the defense is not available to you. However, if you were cited to general sessions court, you may have a defense. Regardless, your citation is likely something that an attorney in Tennessee can handle for you to at least stop you from getting points on your license and your insurance rate going up. Depending on your driving history, an attorney may be able to help fight the ticket, potentially without you appearing in court, to get the citation dismissed. Wish you the best of luck!

Q. can i legally leave home tonight if I am 16 years old (almost 17) and will i be sent to juvenile for it?
14 May 2020
A: If you do not have your parents' permission to leave your house, I would advise against it. If you leave your home without your parents' consent and they call the police, you will be known as a runaway and the court can find that you are an "unruly child" in need of treatment and rehabilitation. If the court determines that you are an unruly child, the court may place you on probation for up to 12 months (6 months at first then they could extend it another 6 months), or, depending on whether or not you have a criminal history, the court may order that you be placed under supervision or custody of the Department of Children's Services ("DCS"). In short, I recommend that you do not leave your house in the future if your parents do not allow you to do so. It could put you in serious jeopardy of court intervention if your parents end up calling the police on you.